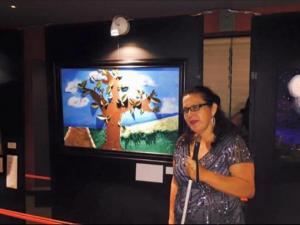 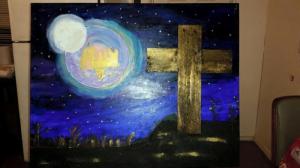 The Rio Grande Valley Chapter’s “Visual Challenges Art Exhibit” raised $5,000 for upcoming NFB-BELL and Silver Bells programs sponsored by the affiliate. The exhibit, which took place Oct. 21 at the Altum Restaurant and Bar, was created in conjunction with the Artists Factory, a local and growing school of art.

Macarena Pena, President of the Rio Grande Chapter, and Benilde Gonzalez, the Director of Artists Factory, met in an art exhibit in June of this year. After exchanging no more than 10 sentences, the desire to promote art and equal opportunities for all Texans led to the creation of the art exhibit.

“Since it was mix-media pieces, you could use any materials you wanted,” Daniel said. “I used sand from the sea, tissue paper and a glue gun with the paint. Other people used a lot of different materials. One chapter member used everything he could find: rocks, paper, plastic. It was pretty cool.”

Sighted artists got a taste of creating art non-visually for the exhibit. Nine local artists from the Artists Factory created pieces while wearing sleep shades.

“The artists didn’t see their own paintings until they were done with them,” Daniel said. “They had a good experience using those non-visual skills. They learned how to paint under shades by observing how other chapter members conducted themselves.”

All 19 pieces were displayed at the Altum Gallery in the dark. The event had two phases. First, more than 250 attendees had the opportunity to explore the tactile exhibit with their hands. Federationists, using long white canes, guided participants through the dark gallery.

After the dark viewing, the lights were turned on and the silent auction began. One piece, entitled “Marina” by Marina Cruz, sold for a record $550. All pieces were sold, as well as mugs, books, markers and 2016 calendars featuring the 19 paintings. (Additional calendars will be on sale at the 2015 National Federation of the Blind of Texas State Convention in Austin.)

Daniel bid on his painting and purchased it for $60 to hang in his office, and he plans to bring it to the state convention for others to see.

“My painting was a long-tailed goldfish; the closest thing I can think of is the fish in the Pinocchio movie,” he said. “It was very abstract; I put the paint on the canvas and smudged it everywhere without following lines…while concentrating on my music. The background was blue with different colors because the paint mixed, so I wanted to use colors that really stood out like yellow and orange on a blue background.”

Significant contributors to the community were present, including representatives from the Mexican Consulate, members of the Rehab Club from the University of Texas, staff from Project HIRE (Helping Individuals Reach Employment), CASA (Children Advocacy and Support Association), staff from South Texas College (STC) and even current affiliate President Norma Crosby and her husband Glenn. A total of nine representatives from various media outlets covered the event, including two local TV channels, the local newspaper, four social magazines and a radio station. (We invite you to read the stories on NFB-NEWSLINE.)

“It was nice to be recognized by the state affiliate and media,” Daniel said. “There have not been too many events here for the blind, so it was nice to not only have a blindness event to get together but a community event. We did it to teach sighted people about the blind community.”

More News from NFB of TX